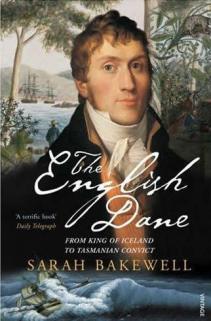 This is the true  story of Jorgen Jorgenson (born Jørgen Jørgensen), a nineteenth-century  Danish adventurer who ran away to sea at fourteen and began a brilliant career  by sailing to establish the first colony in Tasmania.

Twists of fortune then  found him captaining a warship for Napoleon before joining a British trading  voyage to Iceland, where he staged an outrageous coup and ruled the country for  two months as Protector.  He founded his  own army of native Icelanders (eight of them), designed a new flag featuring  three cod against a blue ocean background, and declared the country independent  from its colonial ruler, Denmark.

The revolution was  overturned by the British, who sent Jorgenson back to London as a  prisoner.  More escapades followed, from  confinement in violent prison hulks to patronage by Joseph Banks and travels in  Europe as a spy.  But Jorgenson was  dogged by his own excesses, and ended up transported as a convict to Tasmania –  the very colony he had helped to found.   Here he reinvented himself as an explorer, and, despite his sympathy for  the people, was caught up in the terrible Aboriginal clearances, about which he  wrote vividly in the last years of his life.

The English Dane tells the story of  Jorgenson’s life, and uses his own manuscripts and letters to build up a  portrait of an unforgettable character living in fascinating times.

“Sarah Bakewell has a fine story to tell, and she is its skilled  servant … wonderful, intelligently told.” – Thomas Keneally, The Guardian

“An almost flawless portrait of a man in tune with his times but overwhelmed by them.” – The Australian.

“Her account of the world encountered by Jorgenson is as  rich and nuanced as her description of his life, as his story becomes a way of exploring the changing reality of the early 19th century.”  – The  Independent.

“Such zest propels the prose that one is enthralled by  Jorgenson’s rise and fall, and moved by Bakewell’s vivid portrait of a man  whose flaws bulldozed his talents at all the wrong moments.” – The Daily Telegraph.